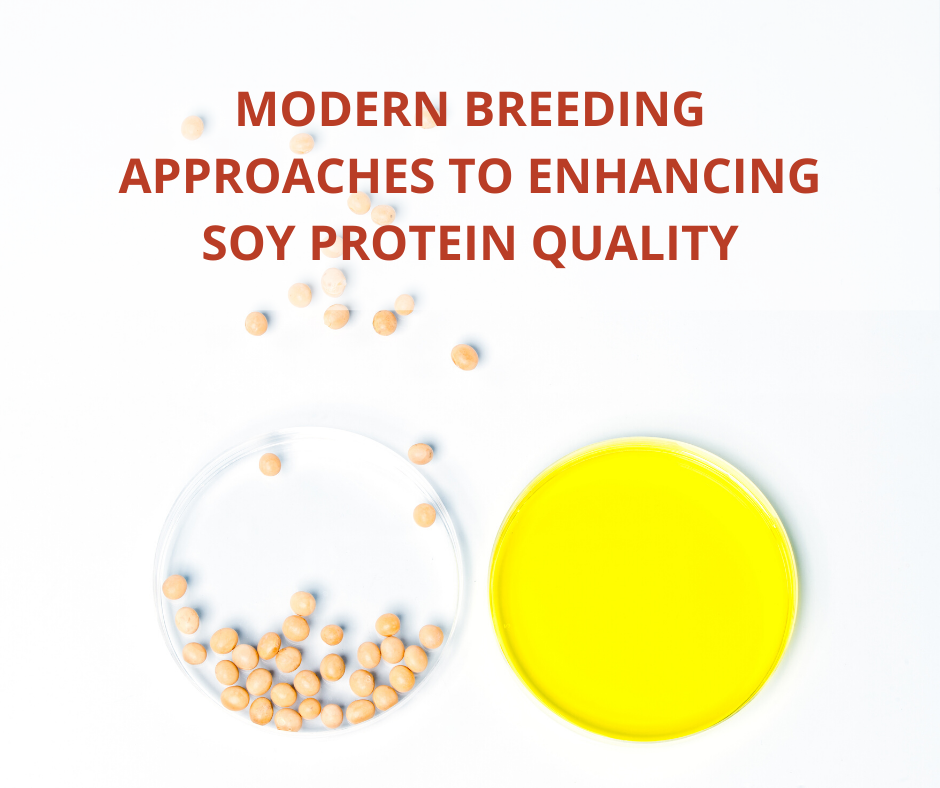 Soybean meal is the dominant protein source for livestock and human nutrition. The nutritional value of soy protein can be further enhanced through genetic selection for elevated levels of growth limiting amino acids such as the sulphur-containing amino acids, methionine, and cysteine. Soy meal also contains phytate, a phosphorous compound that is not digestible by monogastric animals. Reduction of soybean seed phytate would improve livestock nutrition and reduce the environmental impact of phosphorous in livestock waste.

Engineering soybean to produce more oil might not be sustainable unless value also is added to soybean co-products like soybean meal. A successful strategy for adding more value to soybean meal must consider the impact that more specialized high-value industrial protein products might exert upon critical applications such as commodity scale uses of soybean for feed and food. While the natural intrinsic characteristics of soybean protein already have significant value as a co-product, the strength of those advantages may be amplified through precise changes in the composition of soybean seed protein.

The application of biotechnology to the production of food and feed presents both new opportunities and challenges to the health of both human and livestock. As the last decade has witnessed an increase in the prevalence of Food Allergy (FA), the development of validated animal models that can be used to evaluate the potential impact of new food and feeds, both on the development of allergic responses and on growth and development, is needed. Allergic reactions to food and feed are relatively rare but occasionally produce a severe immunological reaction in both humans and animals. Food allergy encompasses several immune mechanisms that can present with a variety of symptoms

The ability to produce high quality protein ingredients from vegetable instead of animal sources has significant opportunities to improve production efficiency via improvements in the utilization efficiency of water and energy during protein ingredient manufacture. Among the vegetable sources of protein, soybeans have a long history of use for both humans and production livestock, in part due to their superior nutritional quality and cost in use relative to proteins from other sources. Utilization of soy protein ingredients in human food products has typically been limited by comparative sensory and functional property limitations relative to protein ingredients from dairy, egg, and meat sources. Biotechnology in many forms has been widely used in the development of improved soybean protein ingredients, including conventional breeding, germplasm screening from plant introduction and mutational breeding populations, molecular biological transformation via recombinant DNA techniques, and enzyme modification